How Life Changes Forever When You Find The Right Person

The couple met in 2000 on the set of The Mexican and struck up a friendship. They tied the knot in 2002 and now have three kids.

Julia Roberts is America’s Sweetheart, but there is much about the A-lister’s life we just don’t know. A true mama bear, she protects her children and husband from the razzle-dazzle of the paparazzi that follows her. Even though she met her husband Danny Moder on the sets of the film The Mexican and tied the knot two years later, we hardly get to see them together in the public eye. The reason is not because their relationship is lacking, but because the happily-married couple prefers to keep their relationship and family out of the limelight.

At 54, Julia Roberts got a lot more candid about her marriage to Danny Moder than ever before. “I think that first kind of real ‘seismic shift’ was meeting Danny, getting married to Danny,” Roberts told actress Gwyneth Paltrow in an episode of her Goop podcast, according to E! Online. “That was the first like my life will never be the same in the most incredible, indescribable way,” she said.

Julia got married in July 2002 to the cinematographer, and together the couple has twins Phinnaeus Moder and Hazel Moder and another son Henry Daniel Moder. According to Julia, her life changed the moment she met Danny. When they met, Julia was in a relationship with Miss Congeniality star Benjamin Bratt and Danny was married to make-up artist Vera Steimberg. Before they chose to get together and date each other in earnest, both “sorted” out their lives separately.

“He sorted his whole thing out, separate and apart from me. And I sorted my life out, separate and apart from him. I think that’s the only reason we were able to ultimately fall in love with each other and be together,” she told Oprah in 2003. When they finally came together, it was the coming together of two unencumbered creative people who would change each other’s worlds.

She was asked how the couple got talking on the sets since she was so famous, to which she told Oprah Magazine, “On the set, I get pretty relaxed. These guys see me at 5 in the morning, when I come stumbling onto the set like ‘What the hell is goin’ on?’ In those circumstances, you can see what a person’s really made of. Some great friendships can be formed because you see one another at your best and worst.”

She has always chosen to live a low-key life when not promoting her projects and her wedding and engagement were just as simple. She reportedly wore a simple emerald ring that was bought from a mall for around £3,000. For her wedding, reports had claimed that she wore a pink cotton dress for the ceremony, while her groom wore a ruffled shirt.

A year after she got married, she told Oprah, “I think it’s not so much that I’m happier now than ever; it’s that I’m more content. I’m in the harbor of my life. A huge part of it is my marriage. My husband, Danny, has really shined the light for me. Because of being married, I’ve met people and experienced all these little things that have nurtured my life—not so much changed it, just nurtured it in a way that’s astounding.”

But, that was then. Years later, with three children together, the couple has found their own rhythm when it comes to parenting and even as simple as choosing towels. Every married couple would understand that the daily choices we make that keep turning the wheels of marriage are just as important as the big decisions like owning a house or not.

“He truly, to this day, to this minute is just my favorite human,” Roberts told Goop. “I’m more interested in what he has to say or his point of view just than anybody. Really, we’re so lucky in that way. We just really, really like each other and we just enjoy each other’s company.”

“We’ve been married for 16 (now 19) years, we’ve been together for 18 (now 21),” The actress told Goop at the time. “. It just gets deeper, it just gets more complex…you’re young and you fall in love and go, ‘Yeah, we’re going to get married and we’re going to build a house and will have kids,’ and all these things that we all kind of dream of, but you don’t know if you’re going to like the same couch and you don’t know if he is going to want to get patterned towels,” she says. They recently celebrated their 18th anniversary together.

“Then, of course, the bigger ones are, will you parent in a way that has a balance to it, that holds hands in philosophy,” Roberts continues. “You just don’t know these things until you are right there doing it and we are so fortunate that there is some kind of some explicable harmony to the way we do things. He’s the best decision I’ve ever made,” Roberts adds.
The couple also takes measures to not allow divorce rumors to affect their children. She said that she is able to shield them from most of it.

“Sometimes we are in the grocery store and I won’t even know something is out, but we’ll see a tabloid and we’ll all be standing there like, ‘Oh, that’s uncomfortable. This is really uncomfortable.’ It can still hurt my feelings because I’m so proud of my marriage. We just celebrated being married for 16 years this Fourth of July, and there’s so much happiness wrapped up in what we’ve found together,” she told Oprah Winfrey in Harper’s Bazaar’s November 2018 issue.

She also joined Instagram on her children’s insistence and has some control over now over what is being said about her marriage. “It’s definitely a balancing act, and it’s been tricky figuring out what to post because I am private, but I am also friendly,” she said.

Her husband shared a Mother’s Day photo that truly showed how close-knit the family is and rubbished all the gossip about them splitting. 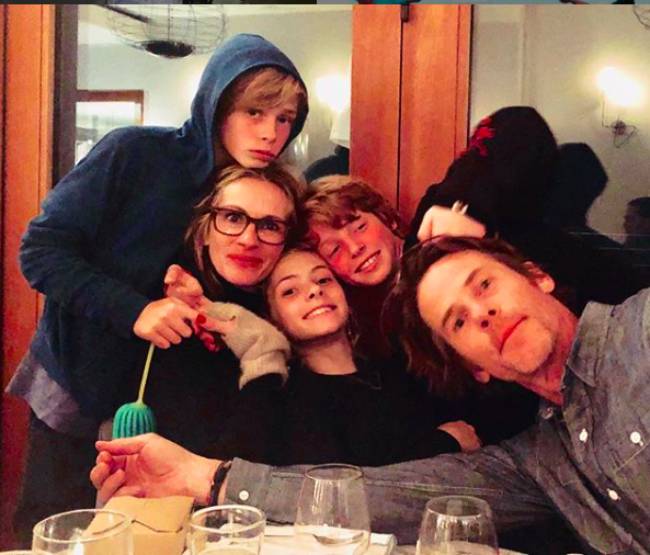 Just because a Hollywood couple chooses to maintain their privacy, it doesn’t mean that they are not seeing eye-to-eye. It might mean that what they have is so precious that they want to protect it with all they have. Raising a family away from the public eye is what they want to do so that they too can have the sweet moments every married couple has.

Check out our community.